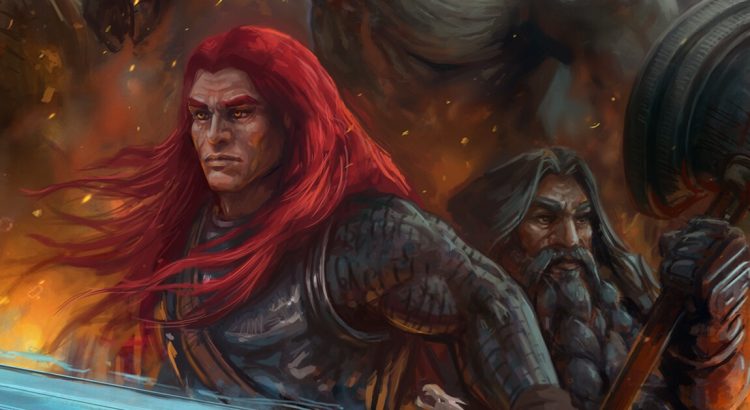 Craig Halloran, creator of the bestselling The Darkslayer series and the Chronicles of Dragon books, and author of more than 80 fantasy novels, answered my questions about his books and his writing process.

My favorite part is finishing the book or series. The closer you get to the end, the harder it is to write, painstakingly so. Once it’s finished, I can sit back and breathe for a while, then I get all fidgety and I have to start writing again a few days later. That isn’t to say that writing isn’t fun, it is, and one of the other best parts is when you bring in a new character and they really surprise you with what they do. They are that monkey wrench that can make really make a great story.

Which books have had the greatest impact on your writing?

I didn’t become a strong reader until later in my teens, so up until then, most of the writing would have been influenced by comic books and Dungeons and Dragons modules. Finally, I broke down and read the Sword of Shannara and got a taste for it. After that it was Conan, Conan, Conan, followed by strong doses of Dragonlance and R.A. Salvatore’s Drizzt Do’Urden stuff.

Which of your characters is the easiest for you to write, and which is the most challenging? Why?

The Darkslayer is my first novel and he is my guy. When I write him, I am totally at home in the brutal, hot and hazy world called Bish. Those stories and characters come from the heart, and when I’m not writing about them, which I haven’t done in a long time, I miss them. But when I do, I’ll be reunited with old friends. There are so many characters that I’ve created over the years that I can honestly say none of them were difficult to write, but the hardest part would be walking away from them or sending them to their doom.

Do you plot your books in detail or develop the story as you are writing?

I’m in the twenty percent minority of pantzers and I’ve truly never outlined anything in my life, but I do believe it would be to my benefit to do so. But, I feel that outlining would eat up too much time, and might overcomplicate things, and I like to keep it simple.

Which fantasy books would you recommend to fans of fantasy fiction?

All of mine, naturally. There are over 80 to choose from. Haha. But, speaking of other works, I really enjoyed Joe Abercrombie’s The First Law series. Fantastic grimdark stuff. I really wish I had more time to read some of the works of my colleagues, I try, and my tablet is full of them, but I can’t find the time.

Where and when do you do most of your writing?

What are you reading at the moment?

Is there anything you would have done differently with regard to your books or writing career?

Absolutely. I would have done everything differently because in the beginning I had no idea what I was doing. Ah, those were the days.

Do you have any unusual hobbies, habits or passions?

Do you listen to music as you write?

Oh yeah, I jam on the Bose headphones and let the soundtrack to Conan the Barbarian sweep me away along with some Iron Maiden, AC/DC and Judas Priest. It really enhances those battle scenes.

Signup for news and special offers!